They came to serve

Posted by Timothy Mark on Mar 20, 2013 in Uncategorized 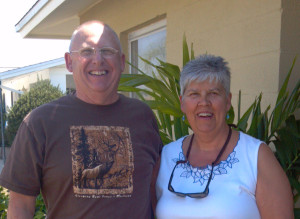 I have a lot of visitors to my home in southwest Florida. Most come to enjoy the beautiful weather and spend some time on the beach. And most are looking for a place to escape the cold and snow of some northern city. But this year I was treated to a visit from my friends Tom and Joanne Kamper and the cool thing was that they came to serve.

I met Tom and Joanne when they were ministering to missionaries in Sells, Arizona on the Tohono O’odham Indian Reservation. I was in Sells doing some ministry and visiting my friend Sherrie Dodson who is a missionary working in the tribe there. We became instant friends.

Tom and Joanne live near Traverse City, Michigan and set out each winter to serve a ministry. They use their unique abilities for the sake of the body primarily through acts of service. So you can imagine my surprise to get a phone call from them last year asking if it was possible for them to come to my place in Florida and help me with the construction project on my home. I was thrilled and welcomed any help they could give me.

They arrived the end of January in their RV and spent the next 5 weeks helping me by repairing and painting the entire exterior of the house. What a blessing! They worked so hard. With the inside of the house basically finished and now the outside pretty much complete, I am once again able to focus on the work of ministry without having to wonder how I will get my home taken care of in my spare time. It is hard to put into words what this act of service means to me. I am so grateful.

Tom and Joanne left my home a couple of weeks ago and the last I knew they were headed to another ministry to serve there.

I will say that serving others is easier for me than letting others serve me. It was a challenge for me knowing they were hard at work on the house while I was inside in the air conditioning working on ministry stuff. I’m not used to being served like that. I do believe they were sent by God to be a blessing to me in this way. And their work has freed me up to focus on the work of ministry God has called me to do.

Exodus 17:12 says “But Moses’ hands grew weary, so they took a stone and put it under him, and he sat on it, while Aaron and Hur held up his hands, one on one side, and the other on the other side. So his hands were steady until the going down of the sun.” Tom and Joanne were my Aaron and Hur. Their act of service strengthened me to continue the work God has called me to do.

They didn’t just come to play. They came to serve.