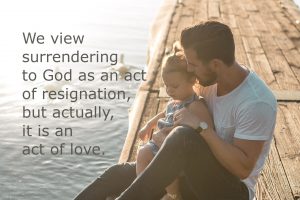 For the past few months, I’ve pondered what it means to surrender to God. The Holy Spirit has repeatedly whispered to me, “Surrender to me.” Traditionally, I viewed surrender as bowing before God, laying down my sword at his feet. It is giving up my right to my life and giving him authority over every aspect of my life. In this context, I tend to view surrender in terms of losing a fight. I am brought to a place of brokenness. I can’t fight anymore. I finally give up and surrender to God. This is one perspective.

Recently, I thought about it in another way. Now I think it looks more like the time John laid his head on Jesus’ chest, reclining at table with him at the last supper. It is falling so in love with someone that you surrender everything to them. Your love for them obliterates any thought of self.

When I mention these things, we may feel a tension rising within. We start to imagine what it would mean to give up control in these areas. The tension we feel is actually the Holy Spirit. He shows us places in our hearts, where we are not fully in love with God. This tension reveals we view surrender as losing a fight. We see surrender as losing control. Maintaining control seems silly when you love someone who is truly in control of all. Far better to view surrender as an act of love. We give God full control because we are overwhelmed with his love for us. Our love for him swells within, and nothing else matters. We are hopelessly in love with him.

God’s call for surrender is a call to a deeper relationship with him. “Surrender to me,” he says. “I love you more than you can imagine. Let go! Let me take care of you. I have plans for you far greater than anything you could imagine. Take a deep breath. Sit still. Let me hold you for a while. Surrender to me.”

That’s a model of surrender based on love, not resignation. Admit it, don’t you want to be held like that?

I want to share with you my testimony of what God has done in my life over the past few weeks. My heart is full of joy over all I see God doing. But it was a difficult journey getting to this place. The route through which God brought me was completely unexpected, and is somewhat uncomfortable to share. But I feel it is important to share anyway. Allow me to explain.

In early April, I attended the Mount Hermon Christian Writers Conference in California. I was excited to meet with industry professionals and to learn more about the craft of writing. I brought with me a couple of book proposals and an expectation of an opportunity to take my writing to the next level. God has blessed me with a growing audience for ministry, and I see God blessing the writing aspect as the ministry grows. I figured my chances were good.

Arriving at the conference, I got the sinking feeling I was wrong. It was a bit overwhelming. I found I had a lot to learn about the writing and publishing process. I met other writers more gifted and farther along the journey than I, who were themselves still looking for a publisher, still waiting for the opportunity to see their work in print.

Quietly in my spirit God spoke to me. He used the speaker on Sunday morning during the Palm Sunday service to do this. In the message he shared the story of the miraculous feeding of the five thousand. For those of you who may be unfamiliar with the story, allow me to share John’s version of it. This is what he wrote:

After this Jesus went away to the other side of the Sea of Galilee, which is the Sea of Tiberias. And a large crowd was following him, because they saw the signs that he was doing on the sick. Jesus went up on the mountain, and there he sat down with his disciples. Now the Passover, the feast of the Jews, was at hand.

Lifting up his eyes, then, and seeing that a large crowd was coming toward him, Jesus said to Philip, “Where are we to buy bread, so that these people may eat?” He said this to test him, for he himself knew what he would do.
Philip answered him, “Two hundred denarii would not buy enough bread for each of them to get a little.”

One of his disciples, Andrew, Simon Peter’s brother, said to him, “There is a boy here who has five barley loaves and two fish, but what are they for so many?”

Jesus said, “Have the people sit down.”

Now there was much grass in the place. So the men sat down, about five thousand in number. Jesus then took the loaves, and when he had given thanks, he distributed them to those who were seated. So also the fish, as much as they wanted. And when they had eaten their fill, he told his disciples, “Gather up the leftover fragments, that nothing may be lost.” (John 6:1-12, ESV)

This story is repeated in all four of the gospels, but only John includes the detail about the boy. Somehow the boy has five loaves of barley bread and two fish. This was far more than a mere sack lunch, but far less than what was needed to feed everyone. He had a generous supply, but it still required a miracle of God to satisfy the hunger of the massive crowd. Jesus takes the bread and fish and miraculously multiplies it to feed thousands until they are full! Herein lies the message the Holy Spirit spoke to me.

No matter what I do for God, it still requires a move of God to meet the needs of others. I bring him what I have, but it requires a miracle from God to multiply it. It was as if God said to me, “Tim, just be the boy and let me be God.” Be the boy. Be the one who gives to Jesus what little you have. Don’t try to scheme and figure out how to broaden your platform. Just give what you have to God. Expect God to multiply it in ways you cannot even imagine.

No one sitting in the grass that day anticipated the miracle Jesus was about to perform. But God knew! Don’t try to understand God’s ways. Just be the boy. Seek humility. Don’t think of yourself more highly than you ought to think. Don’t give room for spiritual pride. Miracles don’t happen through lives comingled with pride.

I sat in the conference center hall and pondered this word from God to me. Sunday night a different speaker referenced the same story. In fact, over the next few weeks, the story of the feeding of the five thousand was repeated by countless speakers. It was almost laughable. Each time it was as if the Holy Spirit nudged me with his elbow and with a wink said, “Be the boy!” Each time it was a confirmation to me as God reinforced this truth in my life.

Now this all reads well, and I am tempted to stop writing here. But as the Holy Spirit confirmed this idea of giving what I have to Jesus and allowing him to do with it as he pleases, he was also peeling away layer upon layer of spiritual pride from my heart. It was a difficult, humbling time.

Each layer of pride was so subtle that at first it was tough to notice it had wrapped its tendrils around my heart. Layer after layer of pride had built up, but not so much that it was easy to see. Pride sneaks in slowly making it difficult to detect. It is a cancer, and it takes a spiritual CAT scan to reveal the cavities where it lies hidden. Somewhere in my journey with Christ I had crossed a line from being amazed by all God is doing, to thinking I was going to do something amazing for God. But God doesn’t share his glory. He is quite capable of doing amazing things all by himself. He just wants me to be the boy.

I was saddened when I realized pride had taken root within me. Broken is a good way to describe it. Solemn. Still. Listening. For weeks this lingered.

At the end of the month, I attended the Exponential Conference in Orlando. Several speakers referenced the feeding of the five thousand, and each time I nodded in agreement with the Holy Spirit. By this point, I had already done business with God. With a new awareness of the work of God in my life, I returned home with a desire to go deeper in my relationship with God. I thought back to a time twenty years ago when God radically moved in my life.

It was January of 1997. The previous December I had finished the Bible Study “Experiencing God” by Henry Blackaby. The Holy Spirit initiated a profound work in my life, and I was consumed with a desire to know him more. I read through the entire Bible three times in the next year. I couldn’t put it down. It was the most astounding book I had ever read. If he could do a miracle in the Old Testament, then he could do the same for me. I didn’t care about watching TV. I didn’t care about anything but reading the Word. It was a profound season in my life.

My prayer now is for God to take me back to that place in my relationship with him, back to where I hungered to know him more. I have become complacent. I have become comfortable. Yes, I love him dearly. But what if the Holy Spirit stirred up a fresh, new hunger inside me? What would God do in and through my life if I had a growing passion burning within me? It is a question I expect God to answer in the coming days.

I’ve taken steps toward that place by turning off the TV. I’m not anti-TV. I’m just taking a break for a time to spend focused time in prayer and in the Word. It is a season of fasting and prayer for me. Already I am encouraged by a renewed sense of his presence and purpose. Where there was sorrow over my pride, I found joy in his presence. Thankfully, when we confess our sins, “he is faithful and just to forgive us our sins and to cleanse us from all unrighteousness” (1 John 1:9, ESV).

I share this and hope it will encourage you. I also covet your prayers during this season. For all of us, remember: Just be the boy. Guard against pride. Pray for God to take you to a new place in your relationship with him.

But by all means, just be the boy.