The Presence of God in the Midst of the Storm 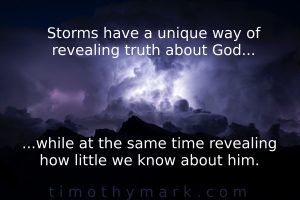 Terror gripped the men. The storm was upon them. Wave upon wave crested over the bulwarks of the boat. The men bailed as quickly as they could. But just when they thought they were gaining on the deluge, the bow pitched steeply into the sea, and another wave swept across the sides. Their backs ached. Their arms cramped in dissent. But there was no time to protest. The wind screeched and howled as it slammed upon the vessel. And with each lurch of the boat, the contents sloshed from one end to the other, thudding against the hull. The storm was gradually winning.

Oddly, one man lay asleep in the stern. The teacher. The Rabi. Oblivious in the midst of the gale. No one wanted to wake him, but the situation was dire. Finally one of the men shook him by the shoulder, and Jesus awoke to see all the men staring at him.

“Teacher,” the man pleaded, “do you not care that we are perishing? Save us, Lord!”

Jesus propped himself up on one arm. He looked up from his seat and surveyed the faces of the men. Anxious, terrified, frightened eyes stared back. Finally he spoke. “Why are you so afraid? Have you still no faith?”

Slowly Jesus rose, his robe whipping in the wind. He turned his back to the men and faced the sea, the wind blowing directly into his face. “Peace! Be Still!” he shouted.

The wind died instantly. The waves took a moment to settle upon one another until at last the sea was glassy smooth. He smiled. Peace rested upon the water. The only sound was the trembling breath of the men as they stared at Jesus. A new fear gripped them. In the back of the group, one of the men whispered, “Who then is this, that even wind and sea obey him?” The realization was complete. They hardly knew him.

Storms have a unique way of revealing truth about God, while at the same time revealing how little we know about him. They leave us shaken and exhausted and weary. We turn to him in our chaos. We cry out for him to intercede. His response comforts and confuses at the same time. He calms the storm. In the light of his glory, we get a brief glimpse of who he is. At the same time we close our eyes and turn away, for we are blinded by it. We are stunned by the realization of how little we know and trust him.

When we find ourselves in a storm, the primary question we have is the same as the disciple asked of Jesus: “Do you not care?”  It is the question at the heart of our concern. Does God care?

I appreciate that Jesus does not mock the disciple for questioning his love for them. God knows our humanity. He knows the times we question him. Instead of chiding, he calms the storm. God does care. In fact, the presence of the storm may show just how much he loves us. He longs to reveal more of himself to us and often uses a trial to bring us closer to himself. He is with us in the midst of the storm. His response to the storm is an example for all of us. He rests. He sleeps. He is not concerned. He is the God of the wind and the waves. Everything is in his control.

Once we understand God cares and is in control, we can join him in the stern of the boat. We can rest with him as the winds howl and the waves crash upon the hull.

The disciples were in shock when Jesus calmed the wind and the waves. They realized they knew little about Jesus. “Who then is this?” was their reply. In the midst of the storm we discover he is with us, and in the process we discover how little we know about him.

Last month, as Hurricane Irma was bearing down, I sent out a prayer request. As of 7:00 that morning, the projected path of the hurricane was directly over my home. At the time, it was a monster category 4 storm. My prayer was for a clear awareness of the presence of God with me, no matter what happened. I knew if I had a clear awareness of his presence, nothing else would matter.

After sending the request, there was nothing to do but wait for the storm to hit. I was unsettled at home alone, so I drove across town to have breakfast with friends. While we ate, one in the group received a text from a friend. It read, “Psalm 91.” I smiled when she shared it with the group because it is one of my favorite Psalms. Years ago I memorized it. It is loaded with promises. My favorite part of the Psalm is the ending. This is what it says:

“Because he holds fast to me in love, I will deliver him; I will protect him, because he knows my name. When he calls to me, I will answer him; I will be with him in trouble; I will rescue him and honor him. With long life I will satisfy him and show him my salvation” (Psalm 91:14-16, ESV).

When my friend read the text, God was reminding me of his protection and his presence. I was greatly encouraged.

I returned home as the winds continued to swell. Tropical storm force winds barreled down now-deserted streets. I checked email. Remember, I had sent out the prayer request a few hours earlier. Several folks had replied with words of encouragement. But oddly, the majority of the emails referenced a single passage of Scripture – Psalm 91! It was highly unusual for multiple people to reference the same passage. I love the way God orchestrates his word to us in such a way that we cannot miss what he is saying to us.

Twelve hours later, the eye of the storm passed to the east of my home and slowed to a category 2 storm by the time it churned past. There was still extensive damage in my area, but my home was not damaged. Trees fell. Some trees snapped in half. Power lines were torn from their poles. Some in my area were without power for more than a week. Debris littered the streets, but I was safe, and my home was not damaged.

I was exhausted. The storm had taken a toll on me, but God had carried me through. His response comforted me. At the same time, like our friends on the Sea of Galilee, it reminded me how little I understand him and trust him.

Remember, God does care. Find him in the midst of the storm sleeping at the stern of the boat. Come to him. Rest in him. Recognize his presence with you. As he moves and calms the storm, press in to learn more about who he is. He longs to reveal more of himself to you. He cares for you. He is completely in control.