Ministering at a Zulu Funeral

Posted by Timothy Mark on Dec 10, 2015 in Uncategorized 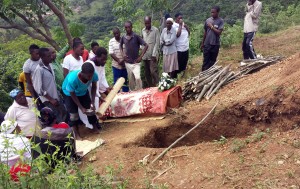 It is going very well here in Durban, South Africa. Thank you for praying. I am at the William Carey School for World Mission. The level of influence I have had has far exceeded my expectations, and for that I am very grateful. I am tired from the challenges, but encouraged by the work of ministry I am able to do.

While I’ve been here, I’ve received messages from several of you saying that you were praying, and that in itself is an answer to prayer. In general, the time here has been a stretching season. In the schedule I received before I arrived, I thought I was scheduled to speak five times for one hour each. I was content with that. But when I arrived, they asked me to teach the students for an additional 11 hours of material beginning on the night of my arrival. It was a bit overwhelming at first. But the students have been so hungry for the word, and they are just soaking up everything I will give them. They have been a huge blessing to me.

But the real stretch came on Tuesday. On Thursday of last week, a 9-year old Zulu girl in a village near the school drowned while playing in the river. The leadership here thought that it might make a huge impact on the Zulu community if I went to the funeral and spoke. My first silent response was basically, “You want me to do what?” Talk about out of your comfort zone. I had no idea what I was getting into. No one could tell me anything about what to expect or what to say or do. I had to rely completely on the Holy Spirit to guide me, believing that he had opened up this door for me.

We left the school by a gate on the side of the property and followed a path to the village. Three of us went – a Zulu student who would interpret for me, another student who went to take pictures, and myself. The Zulu student interpreted for me. However, while the Zulu student could understand English, I could not understand him when he was speaking to me. So I could never understand what he was telling me to do next. In all of this, I was so peaceful. I just kept thinking that all I really had to do was to show the love of God to them. It really didn’t matter what I would say.

For me, the service was like watching a National Geographic special. A blue and white tent had been set up next to the home where the family lived. The sides were open to allow what breeze there was to blow through. There were many people gathered. The family sat on mats on the floor. Many plastic chairs had been set up for guests. It was very, very hot, and I was wearing a full suit. I was given a seat of honor at a table at the front next to the small casket. For the next four hours, I sat through the funeral and graveside. I was given the opportunity to speak several different times, to say a prayer and blessings, etc. When I wasn’t speaking, I tried to look interested in what the other speakers were saying, even though I could not understand a word that was said. I wanted to show respect.

After the burial we tried to excuse ourselves to leave, but they were very clear that it would be a great offense if we left before eating with them. The students and I just looked at each other and said, “What do we do?” Now I was in a very difficult situation where I needed to eat a plate of food that potentially could make me very, very sick. If I did not sit and eat with them, the opportunity to show the love of God would have been wasted. What do you do? Well, for one thing, I said an honest blessing for the food! Ha! There was nothing unusual about the food itself – curried chicken, rice, beans, etc. – it was just that there was no idea to know how the food had been handled. Generally, the first rule of travel is to be very careful with what you drink and what you eat. Thankfully, it tasted great, and gratefully, I did not get sick later.

I really believe this may be why God wanted me to come on this trip. For generations there has been conflict between the Zulus and the white South Africans. According to the folks here, for a white American to give them the honor of attending their daughter’s funeral and eating with them is a huge deal. I describe it by saying that now the Zulu village knows the white man’s Jesus will eat with them and that he loves them. I highly doubt they will remember anything I said, but I believe my presence will be remembered for a long time. It is the old, “Actions speak louder than words” routine. It may be that my actions tilled the soil so that future ministries may be able to reap a huge harvest. There is so much more to tell about this, but it will have to wait for another time.

Thank you for your prayers. Please continue to pray. It has been a difficult time in some regards, but a huge blessing in other ways. As I write this, I only have to speak two more times and then lead worship on Sunday. Then I begin the trip home on Monday. I should arrive Tuesday evening in the United States. I am ready to come home.

Thank you for your part through your prayers and financial support. I really appreciate it.